Protests over five-month detention of students who criticised Madonna varsity 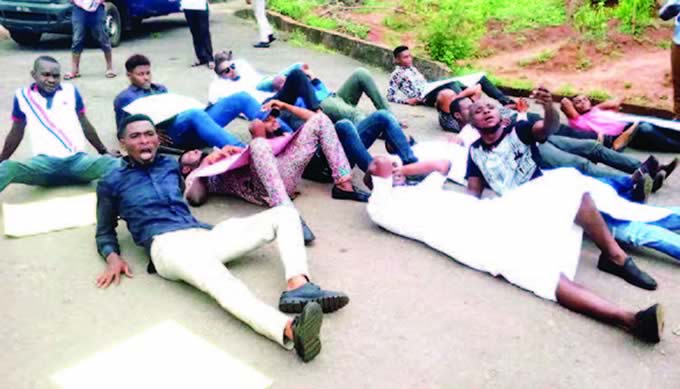 Scores of students, under the aegis of the National Association of Nigerian Students, on Tuesday, blocked the entrance to the Federal High Court, Awka, Anambra State, in protest against the arraignment of six undergraduates of the Madonna University, Okija.

The arraigned students, a member of the National Youth Service Corps and a lecturer of the institution were arrested and had been in detention since February this year over an opinion they posted on Facebook about alleged poor management in the institution.

During protest on Tuesday, the students said if after one week the authorities of the university failed to withdraw the case against their colleagues, NANS would mobilise its members nationwide and cause a shutdown of the university.

Ilozobe said, “We are issuing a seven-day ultimatum to the management of Madonna University that if this case is not withdrawn from the Federal High Court, we are assuring them that we will mobilise students from all over the country.

“We will relocate from our houses with mattresses, stoves, gas cookers and pots to the school gate to shut down the university. This is not a threat, it is a promise.”

Narrating what led to the arrest and prosecution of the six students, the NANS vice-president said the police acted on a petition by Madonna University.

“In the petition, they wrote that these students were criminals, cultists and fraudsters, but we know that our members are not kidnappers, fraudsters and cultists.

“We decided to investigate the matter and understood that the petition was written in order to get the accused out of the NYSC camp and their parents’ houses.

“Further investigation revealed that the school management was acting because the students wrote against them on the social media.”

One of the students was said to have written: ‘Good lecturers are scarce. Madonna University administration should be nice to our lecturers or a good number of them will resign’.

Ilozobe said making such a comment was not an offence and treating it as such was dictatorial.

The detained students, who appeared in court on Tuesday for further hearing on their bail application, were taken back to the Amawbia Prison because the court did not sit due to the absence of the judge, Justice Babatunde Quadri.

The matter was adjourned till July 2 for further hearing.

Addressing journalists on the court premises, the counsel for the students, Chinedu Igwe, said his clients were charged with offences bordering on cyber crime for making harmless comments on the social media.

“To me as a lawyer, it still falls within the constitutional context of freedom of expression. They said a crime had been committed and that Madonna filed a complaint via a petition to the Inspector-General of Police,” Igwe stated.

He said the students were arraigned in February, while an application for bail was made by the defence counsel, which the court granted.

The lawyer, however, lamented that some of the conditions the court gave were stringent and the defendants subsequently filed an application for variation, which is still pending.

A parent of one of the detained students, Christopher Onyejekwe, said he had gone to the founder of Madonna University, Rev. Fr. Emmanuel Edeh, 11 times to beg him to withdraw the charges against his son to no avail.

He stated, “When the police arrested the students, I went to Fr. Edeh 11 times and met him. On the 11th occasion, the only thing he told me was to go and recite the Hail Mary three times, which I did.

“After a while, I went back to him with three prominent persons, knelt before him to beg him, but he said over his dead body would he withdraw the case, adding that if I liked, I should bring the President of Nigeria to come and beg him.

“That was how I stopped going to beg him. They kept the students in police custody for more than a month before they were taken to the Awka Prison.”

He appealed to the Anambra State Governor, Mr Willie Obiano, and the Catholic Bishop of the Awka Diocese, Most Rev. Paulinus Ezeokafor, to intervene in the matter.

Onyejekwe added, “Two parents have died in the course of this matter. They had begged Rev. Fr. Edeh before their deaths. Who killed them?  What will Fr. Edeh gain from all these?”

Another parent, Mrs Charity Nnamani, whose son, Chijioke, is among the accused persons, said her son was picked up on February 4.

She said her son was a month shy of completing his NYSC programme in Asaba, Delta State, when the police went to arrest him on allegations of armed robbery and kidnapping, causing the NYSC management to abandon him.

Charity stated, “On February 28, we fulfilled the bail conditions of the Federal High Court, Awka, for his release. When they said I should bring a surety, I brought a Grade Level 15 official, who worked under me as the surety. My Permanent Secretary is aware of it and asked that a director should minute on the letter, which the woman I brought as surety would submit to the court.

“We brought the letter and the surety, yet my son has not been released.”

She added that all attempts to see the proprietor of the university had proved abortive and also lamented the incessant adjournments of the case and the absence of the judge.

Efforts to get the reaction of the prosecution counsel, Augustine Oboo, did not yield results as calls to his mobile telephone line rang out and text messages sent to him were not replied to as of the time of filing this report.