Iraq gets new government after months of political deadlock 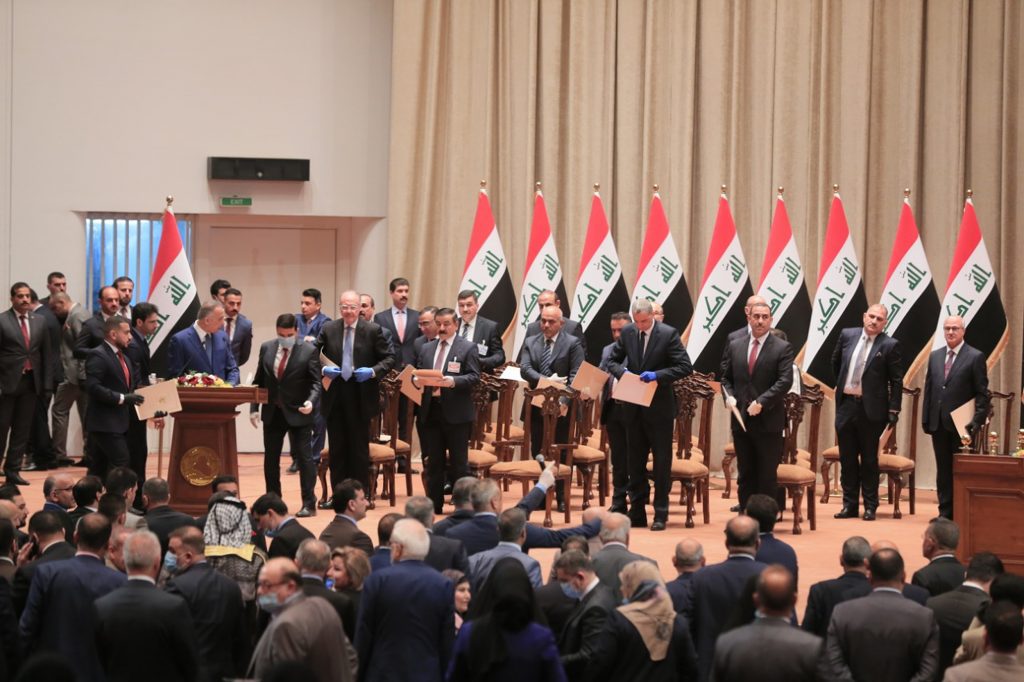 Mustafa Kadhemi took office as Iraq’s premier early Thursday after breaking months of political deadlock, taking the reins amid a staggering economic crisis, a health pandemic and the spectre of renewed protests.

Observing social distancing to curb the spread of the coronavirus, lawmakers gathered at parliament in masks and gloves around 9:00 pm local time, but the vote was delayed for hours to make last-minute edits to ministerial posts.

Kadhemi soon received a congratulatory call from US Secretary of State Mike Pompeo, who announced a 120-day waiver extension on US sanctions to let Iraq buy gas from neighboring Iran.

The waiver is “a display of our desire to help provide the right conditions for success,” the State Department said.

Kadhemi’s nomination came after weeks of lobbying deeply divided political parties, including those close to neighbouring Iran who had been wary of his ties to the United States.

One hardline faction had accused Kadhemi of conspiring with Washington over the January drone strike that killed Iranian general Qasem Soleimani and Iraqi commander Abu Mahdi al-Muhandis outside Baghdad airport.

MPs approved 15 ministers out of a prospective 22-seat cabinet, with seven ministries — including the key oil and foreign affairs positions — still empty as political parties squabble over shares.

He became the first premier to step down since the 2003 US-led invasion that toppled dictator Saddam Hussein, but stayed on as caretaker PM in the absence of a successor.

– A partial government -The new PM appeared to have brought Iran-aligned factions on board, with endorsements from both Soleimani’s successor as Quds Force chief Ismail Qaani, and from Mohammed Kawtharani, the pointman on Iraqi affairs for powerful Iran-backed Lebanese movement Hezbollah.

The ministers who were approved included those for the sensitive portfolios of finance, interior, defence, health and electricity — securing the majority that Kadhemi needed for his cabinet to be considered viable.

The new body is meant to hold early elections seen as an opportunity for a political reset for the country, but it will also face urgent policy priorities.

Iraq’s GDP is set to shrink by 9.7 percent this year and poverty rates may double, making it the country’s worst annual performance since 2003, the World Bank has warned.

Meanwhile the coronavirus pandemic has killed more than 100 Iraqis, and the country’s dilapidated health system is at risk of being overwhelmed by a spike in cases.

Kadhemi will also have to resolve budget and oil disputes with the semi-autonomous Kurdish region in northern Iraq, and lead a strategic dialogue with the United States in June over economic and military ties.

In the phone call, Pompeo mentioned talks with Kadhemi and agreed on “working together to provide the Iraqi people the prosperity and security they deserve,” the State Department said.

The new PM has pledged to strike a balance between competing allies Washington and Tehran, which have been at deepening loggerheads since the US reimposed tough sanctions on Iran in 2018.

The United States has also blamed Iran and its allies for a spate of rocket attacks on troops in Iraq that have killed US, British and Iraqi forces in recent months.

Just hours before parliament’s vote, a new rocket attack — the first since late March — hit a military complex outside the Baghdad airport where US troops are based.

Iraq’s parliament voted to oust all foreign forces, including some 5,200 US troops, after Soleimani’s killing in January — but the decision has yet to be implemented.

And remnants of the Islamic State group have apparently stepped up attacks in recent weeks, two years after the country declared the jihadists defeated.

In his overnight address to parliament, Kadhemi pledged to hold early elections and draft an emergency budget law.

But Kadhemi’s challenges are not just external, said Renad Mansour, a researcher at the London-based Chatham House.

“Kadhemi will try to retain some level of independence from the political blocs as prime minister, but the biggest spoiler could be holdovers from Abdel Mahdi administration who will be wary of him,” Mansour told AFP.

“It will be increasingly difficult to do the kind of horse-trading required to reach consensus in Iraq given the level of fragmentation in the political scene,” he said.